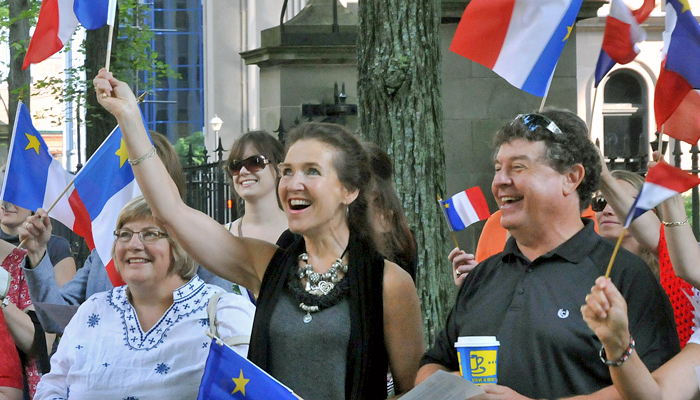 Observed on August 15, National Acadian Day is a celebration of the cultural vitality and enduring heritage of the Acadian people.

Introduced in 1881 during the first National Convention of the Acadians in Memramcook, New Brunswick, the decision to adopt a national day was made in order to recognize the distinct nationality of the Acadians. More than a century later, the federal and provincial governments introduced legislation to support National Acadian Day in 2003 and in 2004 respectively.

In the Department of Communities, Culture and Heritage, Acadian culture is recognized year-round.  Through programs, services, resources and heritage sites, the Department continually works to represent the interests of Acadian communities and honour their legacy.

At Acadian Affairs, staff contribute to the preservation and growth of Nova Scotia’s Acadian and francophone communities by advising and supporting government efforts to offer services in French. The group also administers the Vive l'Acadie Community Support Fund. Funded through donations collected from the province’s Acadian Licence Plate Program, Vive l’Acadie supports cultural projects designed to add to the social, economic, educational, and spiritual life of Acadian and francophone communities.

As one of Canada's oldest archival institutions, the Nova Scotia Archives acquires, preserves and makes available the province's documentary heritage. Determined to make these provincially significant records as accessible as possible, the Archives' website features nearly 80 virtual exhibits and resource guides; seven are devoted to Acadian culture, while many others are presented in French.

The Nova Scotia Provincial Library and the province’s public libraries offer Acadians and francophones a variety of classic literature, fiction and non-fiction materials in French.  From online French library catalogues at the Eastern Counties Regional Library and the Western Counties Regional Library, to downloadable ebooks and audiobooks in French, library staff ensure that a love of books and reading isn’t limited by language.

For a complete list of French-language services offered throughout the Nova Scotia Government, visit the Bonjour! page.

Introduced in 1881 during the first National Convention of the Acadians in Memramcook, New Brunswick, the decision to adopt a national day was made in order to recognize the distinct nationality of the Acadians. 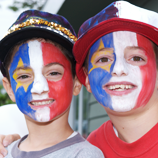