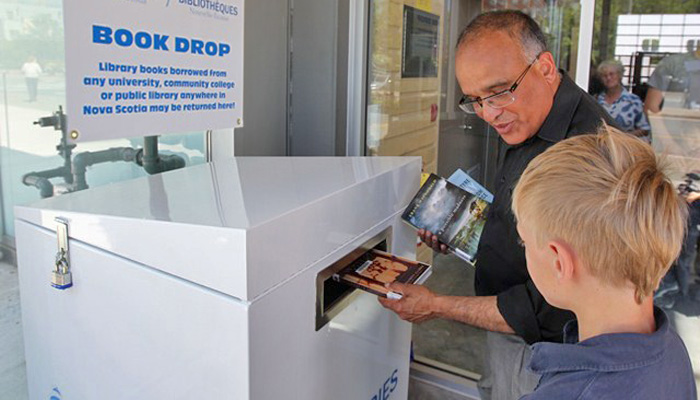 Thanks to a partnership between the Halifax Seaport Farmers’ Market and Libraries Nova Scotia, it’s easier than ever for people to enjoy and return books, DVDs and magazines borrowed from libraries across the province.

On July 10, a new drop box at the market’s north entrance was officially unveiled with help from Communities, Culture and Heritage Minister Leonard Preyra. Accessible during the market’s hours of operation, the box is a simple, but effective way for borrowers to return library items while shopping for some of the province’s best locally grown and made products.

Recognizing the value that the drop box service would provide to shoppers and vendors alike, members of the farmers’ market worked with Libraries Nova Scotia to bring the idea to fruition. Supported by the Nova Scotia Provincial Library and Novanet, a consortium of post-secondary libraries, the drop box is now part of the highly successful Borrow Anywhere, Return Anywhere program.

Launched by Libraries Nova Scotia in 2009, the main goal of Borrow Anywhere, Return Anywhere is to make it as easy as possible for people to use libraries. Backed by 100 participating public, community college and university libraries, the collaborative program ensures that patrons can return items hassle-free and regardless of where the material was originally borrowed.

Libraries Nova Scotia represents Nova Scotia university, community college and public libraries. Its mission is to contribute to the development of sustainable communities throughout the province by providing all citizens with seamless, barrier-free access to the world’s information sources.

Accessible during the market’s hours of operation, the box is a simple way for borrowers to return library items while shopping for locally grown and made products. 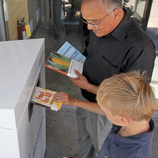