Tony Ince, Minister of Communities, Culture and Heritage, unveiled the flag on January 19, as a lasting symbol of the holiday that honours the people, places and events that have contributed to this province's history and culture.

The five students whose illustrations inspired the final flag design, their families, members of the selection panel and flag designers Adam MacKenzie and David Campbell joined the minister at Province House for the unveiling.

"Nova Scotia Heritage Day celebrates our collective cultural heritage and the contributions of all Nova Scotians," said Mr. Ince. "We want our youngest citizens significantly involved in our heritage because it's an important part of who they are."

"This February holiday is near and dear to my heart and important for Nova Scotians," said deputy premier Diana Whalen. "It is wonderful to see it help build pride in our province, particularly among you - Nova Scotia's students - our future."

A panel chosen by Arts Nova Scotia picked the five illustrations from 240 that were submitted. Sperry Designs used those drawings as inspiration for the final design.

The colours in the flag reflect freshness, growth, landscape, water, and optimism. The interlocking design suggests bringing new meaning to old constructions, as in Mi'kmaw and African basket weaving, to create something different and new. The interlocking pattern suggests a strong, enduring fabric, diversity and the connections between our past, present and future.

The flag will be raised and flown for the first time on February 10 at Province House, in time for the holiday on February 15.

We want our youngest citizens significantly involved in our heritage because it's an important part of who they are. 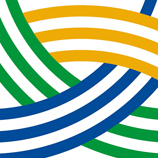