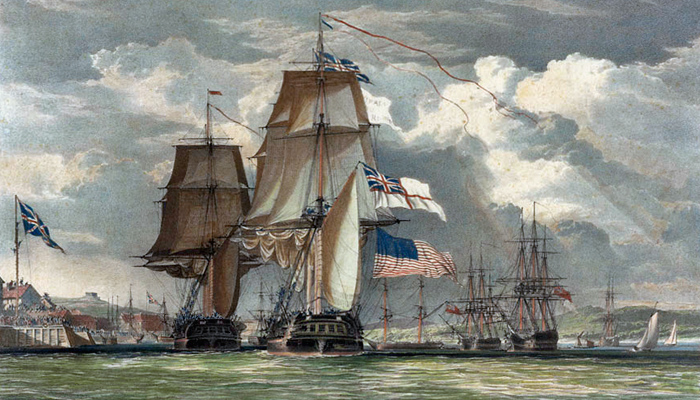 The Battle between Shannon and Chesapeake

Throughout the first year of the War of 1812, Nova Scotia had remained relatively sheltered from the unfolding conflict, but on June 6, 1813, a significant part of the war sailed right into Halifax Harbour.

When the United States first declared war on the British Empire during the summer of 1812, the British Navy was secure in its size and strength and did not see the small and untested American Navy as any kind of threat.

It didn’t take long for that assumption to be proven wrong. The newer, faster American ships were heavily armed and their crews were well trained. By the end of the war’s first year, five major naval battles had taken place and each one had resulted in defeat for the British.

As the second year of the war began, the British Navy’s need for a victory was desperate. Just before setting out to sea from Halifax, Captain Philip Broke of HMS Shannonstated in a letter to his wife, “We must catch one of those great American ships and send her home for a show.”  In three short months, Captain Broke would do just that.

On June 1, 1813, HMS Shannon challenged USS Chesapeake to a battle off Boston Harbour. Even though the two vessels were evenly-matched, Bostonians eagerly anticipated yet another American victory and began preparing celebrations before the battle had even begun.

Those spectators were soon left shocked as a short, but very bloody confrontation ensued. As cannons raged and boarding parties attacked, Chesapeake’s wounded Captain, James Lawrence, famously shouted at his men: “Don’t give up the ship”, but those words were in vain. In less than fifteen minutes, Chesapeake had been defeated in what would become one of history’s deadliest single-frigate battles.

Wasting no time, a prize crew was put aboard Chesapeake and Shannon escorted her and her surviving crew to Halifax, arriving there on June 6, 1813.

The news of the British victory set all of Halifax abuzz and when the ships finally arrived on a sunny, Sunday morning, the churches emptied and the streets filled with excited Haligonians. Among the revelers was a teenaged Thomas Chandler Haliburton, future Supreme Court Justice and author. Later in life he vividly described the day in a letter saying that the ships were  “[…] greeted with vociferous cheers. Halifax was never in such a state of excitement before or since.”

While British sailors enjoyed the revelry, the wounded of both sides were taken to the Royal Naval Hospital. Captain Philip Broke, who had been seriously injured during the battle, was taken to the Commissioner’s House. He eventually recovered and returned to England, but due to his injuries, was never able to serve at sea again.

During the journey from Boston Harbour, Captain James Lawrence succumbed to his wounds and died. Once in Halifax, Lawrence and his first officer, who died several days after arriving in Halifax, were both buried with honours in St. Paul’s Cemetery (now known as The Old Burying Ground); however Lawrence’s body was later disinterred and returned to America.

The victory restored British morale and marked a shift in the fortunes of the war at sea.  While the Americans won a few more battles, many US Navy ships were soon captured by the British or blockaded in American ports. A reinforced British Navy squadron based at the Halifax naval yard soon blockaded and raided the entire American coast.  A force from Halifax captured and occupied the Castine district of Northern Maine, bringing in a rich source of custom revenue. During these raids, over 2000 enslaved Africans escaped to freedom, many of whom settled in Nova Scotia.The battle between Shannon and Chesapeake became a cultural icon for wartime success.

The news of the British victory set all of Halifax abuzz and when the ships finally arrived on a sunny, Sunday morning, the churches emptied and the streets filled with excited Haligonians. 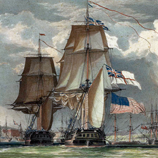