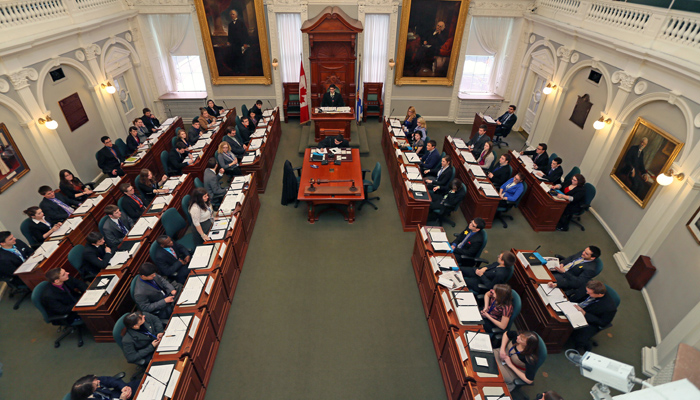 A mock-parliament conducted in French, the event took place from January 4 to 6 in Halifax, giving Acadian and francophone youth from the Atlantic Provinces, Quebec, Manitoba, Alberta and British Colombia the opportunity to simulate all aspects of the Canadian political system.

Representing the fictitious nation-state of Acadie, fifty-two of the participants served as members of parliament, either as part of the left wing governing party CIEL (Coalition innovatrice écologique et lucide de l’Acadie) or as members of the official opposition, PARADis (Parti de l’action réformiste acadienne disciplinée). To fully capture the ins-and-outs of the House of Assembly, the remaining students took on roles as staff members and media.

Prior to the event, participants prepared four bills that reflected their collective interests and issues. These included a prohibition of toxic cosmetic products; new management plans for waste and landfill sites; the decriminalization of assisted suicide; and issues concerning citizenship and immigration in Acadie.

One of the highlights of the event was an unexpected emergency debate that took place on the second day of the proceedings. Planned in advance, the unknowing participants were suddenly informed that three military planes had been stolen from the neighbouring state of Britannia and had crash-landed in Halifax Harbour.

Putting all of their knowledge to the test, the students took on the fake crisis with enthusiasm. They shuffled ministers, established emergency departments, placed embargoes on media and mobilized the Acadian Army to their country’s borders.  When all was said and done, Acadie remained safe from threat and the mock-parliamentarians had learned just how well they think on their feet.

Organized by the Conseil jeunesse provincial de la Nouvelle-Écosse (Provincial Youth Council of Nova Scotia), the first Acadian Youth Parliament took place in Halifax as part of the 2004 Congrès mondial acadien. Since then, the mock parliament has taken place every two years and has been hosted by various Atlantic Canadian cities.  This year’s simulation is the fifth session of the event and as part of its return to Halifax, took place at Province House, Canada’s longest serving legislative building.

The Conseil jeunesse provincial de la Nouvelle-Écosse serves the young people of the province’s Acadian regions. The mission of the council is to represent and defend the interests of Acadian and francophone youth, and to provide young Acadians and francophones with training and mentoring that will help them develop their leadership skills, as well as their pride in their language and culture.

The Acadian Youth Parliament is sponsored by the Société nationale de l'Acadie. Organizers also wish to thank Canadian Heritage and Acadian Affairs for their support of the successful event. 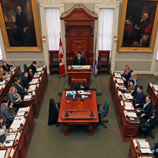