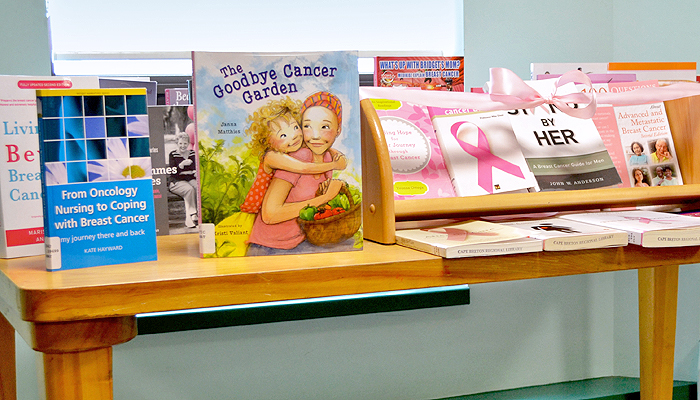 Shock. Fear. Anger. These are just some of the jarring emotions breast cancer can trigger in a patient, their family, and their friends. For many, facing this complex disease is overwhelming and the sense of helplessness it creates can be acute. Breast cancer is a struggle and for those caught in the fight, nothing empowers like knowledge.

Joy MacInnes of Sydney, Cape Breton recognizes this fact. A three-time breast cancer survivor, Joy knows first-hand that being educated about the disease is one of the best weapons people can have at their disposal. From research reports to personal memoirs, engaging in active learning about the disease enables patients to make informed decisions, helps loved ones to understand the vital role they play, and serves as a source of comfort.

Wanting to make sure that her community had as much access as possible to valuable breast cancer resources, Joy developed the idea of creating a collection of materials that could be available through local libraries. She brought her plan to the Cape Breton Regional Library and – with the support of library staff – started the process of applying for a funding grant from the Canadian Breast Cancer Foundation. Inspired by Joy’s original idea, the Nova Scotia Provincial Library and Breast Cancer Action Nova Scotia became involved, and the project quickly grew to become a province-wide initiative.

Thanks to these tireless efforts, the Nova Scotia Breast Cancer Resources Collection was unveiled this fall at the McConnell Library in Sydney. Comprised of 63 printed books, 14 ebooks and a selection of DVDs, the collection ranges from clinical texts to children’s stories. The public can access the Collection online through direct links found on Regional libraries websites and the materials can be borrowed in person at any of the province’s 79 libraries.

Selection and purchase of the books for the collection was conducted by a team of representatives from Nova Scotia Provincial Library, Breast Cancer Action Nova Scotia, and librarians from Halifax Public Libraries and Cape Breton Regional Library. Funding for this important project was provided by the Canadian Breast Cancer Foundation, Atlantic Region.

October is Breast Cancer Awareness Month. This year, it is estimated that 22,700 women and 200 men will be diagnosed with breast cancer. While these numbers are staggering, hope still remains. Fewer Canadian women are dying from breast cancer today than in the past. Deaths related to the disease have decreased by almost 40% since 1986, which is largely due to earlier detection through regular mammography screening, advances in screening technology, and improved treatments.

A three-time breast cancer survivor, Joy MacInnes knows that being educated about the disease is one of the best weapons people can have at their disposal. 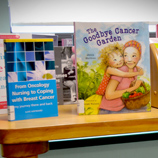