The Department of Communities, Culture and Heritage engages in research about the economic, social and intrinsic aspects of culture. Following are reports about culture conducted or commissioned by CCH or produced in partnership with others. 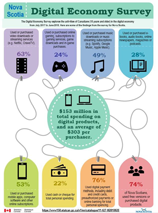 This Nova Scotia Digital Economy infographic features data from the Canadian Digital Economy Survey (DES).  The DES is part of a larger effort to better understand how individual consumption and purchasing patterns are changing in an increasingly digitalized world.

The survey was conducted by Statistics Canada and covers the period of Canadians’ activities from July 2017 to June 2018. It covers the use and purchase of various digital products, defined as goods or services that were ordered and delivered online (in a digital format).

Trade of Culture and Sport Products (TCSP) provides measures of the international and interprovincial trade of goods and services attributed to both culture and sport, inclusive of the arts and heritage.

This data was prepared by Statistics Canada and complements the Canadian Culture Satellite Account (CSA) and the Provincial and Territorial Culture Satellite Indicators (PTCI) by providing additional information regarding the activities of culture and sport in Canada, the provinces and territories.

At the national level, the TCSP provides data on trade imports and exports for numerous top trading partners (such as the United States, Mexico and the United Kingdom), and for various economic and regional blocs such as the European Union, the African Francophonie, and the Association of Southeast Asian Nations. It also provides imports and export data broken down by CSA domains and sub-domains. 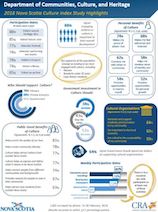 The Nova Scotia Culture Index (NSCI) (6.8MB PDF) is a social research tool that provides insight into how average Nova Scotians participate in, are aware of, and value major aspects of culture in the Province.

In this report, measures were updated from those developed for the initial NS Culture Index survey in 2015.  A second survey in 2016 established the benchmarks for Personal Growth and Public Good.

As citizens’ response to culture changes, the Nova Scotia Culture Index will continue to measure, track, compare and analyze the differences over time. 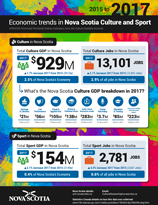 Data released by Statistics Canada in April, 2019, show the economic contribution of culture and sport in Nova Scotia has continued to grow since 2010.

The Provincial/Territorial Culture Indicators (PTCI) report shows the economic contribution of sport and culture in every province and territory in Canada. Nova Scotia uses this data to inform culture-related policies, programs and services for all Nova Scotians.

Note: Statistics are subject to revision each year as more complete economic information becomes available to Statistics Canada. As such, the 2015 to 2017 Culture indicators presented here represent a new methodology and statistics are not directly comparable to previous years. 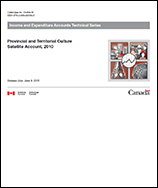 Released in June, 2015, and based on economic data from the 2010 year, this report provides Provincial and Territorial data from the Culture Satellite Account. This report was prepared for the Federal- Provincial-Territorial Table on Culture (FPTTC) and its associates by the staff of the Satellite Accounts and Special Studies Section, National Economic Accounts Division, Statistics Canada. Review the full report or a summary of the data from Statistics Canada. 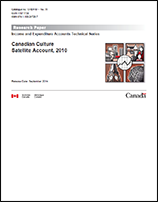 This report articulates the Canadian Culture Satellite Account (CSA) developed by Statistics Canada. The Canadian CSA provides measures of the economic importance and activity of culture, arts, heritage and sport in Canada in terms of output, gross domestic product and employment, for reference year 2010.

The report was prepared for the Federal- Provincial-Territorial Table on Culture and Heritage (FPTTCH) and its associates by the staff of the Satellite Accounts and Special Studies Section, National Economic Accounts Division, Statistics Canada.

Since the beginning, Nova Scotia has been a funding partner in the development of the Culture Satellite Account and remains actively involved as a leader of the FPTTCH’s Culture Statistics committee. 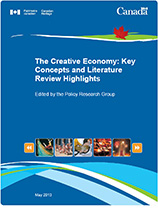 The creative economy continues to emerge globally, and holds exciting opportunity for Nova Scotia. This recent literature review suggests that the creative economy is revitalizing manufacturing, services, retail, and entertainment industries across the world. It is also changing the work people do, what they want to do, and where they want to live. Prepared as a common reference of basic information on the creative economy for the Creative Economy federal-provincial-territorial working group (Canada), this document outlines key definitions and models that are informing policy decision-making around the world and is based on a reproduction of selected text and discussion from two recent government-sponsored literature reviews on the creative economy, one supported by the Government of Nova Scotia and the other supported by the Government of Canada.

Email cultureresearch@novascotia.ca for more information on these reports and Communities, Culture and Heritage research initiatives. 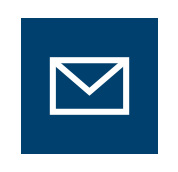 Sign up for regular Research updates about the latest statistics available or projects underway.